Evertree: A subject close to our hearts – and one of regularities #DHDL

As broad as the range of topics discussed in "Die Höhle der Löwen" usually is, rarely have the two main topics in the dialogue between founders and investors been so contradictory. On the one hand, the emotionality of the topic - on the other hand, the big question about the existing regulations that significantly determine the market. But the founders managed the balancing act. 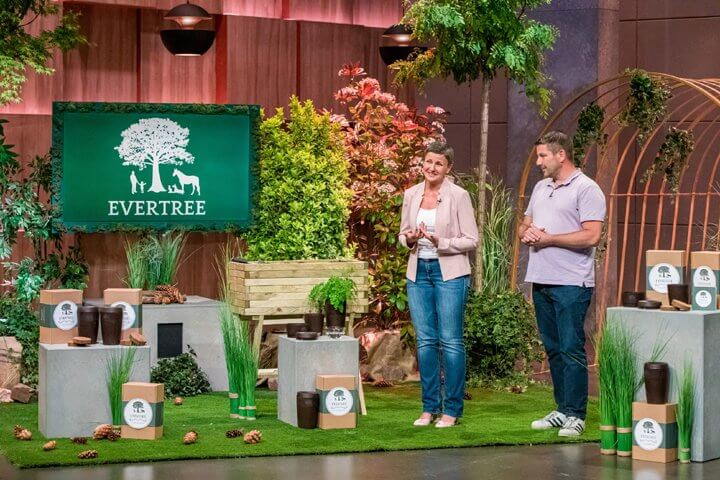 The Düsseldorf siblings Helena and Andreas attracted sympathy right from the start: the authentic and very personal pitch, which broached the issue of the death of the father as the origin of the wish to give death and funerals something less final, ensured a sympathetic silence. The idea of the two: a special urn in which tree seeds are added to the ashes of the deceased, so that a tree can grow from it after the burial.

All investors agreed that they found the idea very beautiful. Carsten Maschmeyer reads the description on the packaging, finds the text “touching” and realises that there is a lot of heart in it. Later he will add “one of the most touching pitches I have ever seen here in the cave”. But he will also drop out because he sees himself as a venture capitalist and, as such, does not want to invest in “such a lovely innovation” and make money from it.

And of course, with such a topic, founders can get a lot of praise, but ultimately no investment, because it doesn’t feel right for every investor to do business with it.

But the rest of the lion’s field is feeling its way more and more into the subject, asking the usual questions about selling price, manufacturing costs and sales revenue. The relatively low price of the urn of 114 € underlines the sincerity of the founders, even if the margin is still alright overall. Especially when it comes to pricing, such topics require a great deal of tact: if you set the price too low, the business will not pay off; if you set it too high and exploit the emotionality of the topic to the fullest, you risk lasting damage to your reputation in such a sensitive market.

But after the founders have been able to believably demonstrate the basic demand and the business model, a topic dominates the talks that is often treated somewhat stepmotherly by founders: Regulations and official rules.
Although there are many framework models for analysing the business environment, these are far less popular with start-ups than with larger companies. The reason for this is difficult to grasp, but a valid theory is, for example, that start-ups operate under conditions of extreme uncertainty anyway. So as soon as it has been clarified whether the project is basically legally feasible, that is already enough for many. Later changes seem difficult to grasp anyway. Others, on the other hand, are already building on upcoming changes that can give them the big push, which is also highly risky, but can be very rewarding.

And in the case of Evertree, it is also a bit like that: In most cases, such burial by urn is permitted for animals, but difficult for humans and only possible in a few places in Germany with special permission. Other countries, however, are already further ahead here, so the founders hope that more will soon be possible in Germany, too.

However, the two Düsseldorfers, who are still building up the urn start-up on a part-time basis, are extremely well informed and can provide many details on regulations and developments in this field. They believe in the upcoming changes and want to be ready for them, but until then they want to distribute in the animal sector and abroad.

A perfectly valid strategy for a start-up. Because in this case, the market for animal burials is certainly not small, and it takes time anyway to build up B2B sales for animal crematoria and similar multipliers, as the founders are planning. They are already members of the corresponding association.
Dagmar Wöhrl finally drops out but promises to contact the animal crematoria she knows.

After everyone else has left, the founders count on Nils Glagau. And indeed, he shares the different view of death, talks about a forest cemetery burial and celebrations on cemeteries in Mexico. Here, the founders and the investor are fully on the same wavelength, and indeed the lion then makes the offer, becoming the third co-owner of the company for 75,000 €.

An investment that will hopefully help to stimulate discussion, bring about a change of thinking in the authorities and thus at some point make it possible for many more people or their relatives to have the burial they sincerely desire.