STUR: The role of crowdfunding in the rating process #DHDL

The 4th episode of the anniversary season of "Die Höhle der Löwen" was not only special in terms of the guest lions and former candidates from Ankerkraut. The founders also had a lot to offer. For example, the pan developers from STUR came up with considerable order quantities from crowdfunding. But they failed in the evaluation discussion, because the lions did not want to equate the crowdfunding income with normal turnover. Reason enough to ask why investors think this way and what crowdfunding is actually worth when it comes to valuation. 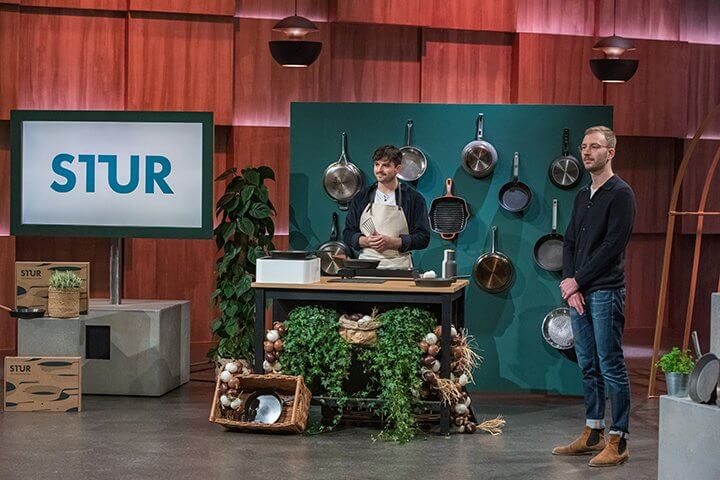 All of the lions – six this time because of the Ankerkraut couple – praised the great performance and the great success of the founders Filip and Simon, because their figures were impressive.

The founders, who had already built up an impressive community around pans, had used this and all their accumulated pan knowledge to develop their own pan. The new company STUR could now offer cast-iron pans that were significantly lighter than their counterparts and had a number of other advantages for the discerning amateur chef.

And it was precisely with this community that they had made an extremely successful crowdfunding campaign. The 20,000 € they had set as their goal, i.e. the value for which they wanted to generate pre-orders, was reached after a mere 3 minutes. After one hour, they had already reached 100,000 €, and after 28 days, they had reached a whopping 1.25 million. In the German-speaking world, such sums are indeed very rare, and only very few were more successful.

Even after the campaign, they continued to sell, so that eventually 1.7 million € were raised from crowdfunding.
The founders’ offer was a post-money valuation of €3.8 million, because they wanted €380,000 from the lions, and offered them 10% of their company in return. If one were to consider the crowdfunding sum as turnover, the valuation would be approximately twice the turnover. One also likes to say “a multiple of 2”. Now, for a seemingly quite scalable product business, this does not seem unconditionally excessive. In the cave, we have had much higher multiples of 30 or even more.

But Ralf Dümmel, of all people, who has probably already sold about 50 to 60 million pans through his company DS Produkte, drops out because he thinks the valuation is too high for the fact that nothing has been delivered yet. In view of the high praise that he precedes, it almost seems a little strange that he doesn’t even try to negotiate.

Carsten Maschmeyer explains it a little more precisely in his refusal: “Revenues from crowdfunding are not to be seen quite like sales, and not like an investment either, but rather they have been used to build up claims on the part of the purchasers. After all, they have a right to receive the products they ordered. The founders are therefore not completely free in the use of the 1.7 million euros generated so far; this money may only be used to enable production and shipping. In addition, another factor that actually speaks for the founders has a weakening effect: the success with their own community. The fact that the founders developed the product with the readers of their blog is what made their crowdfunding so successful. On the other hand, this also means that this potential has already been nearly exploited. As Carsten Maschmeyer puts it, they will no longer have the conversion rate they had with crowdfunding in the future. Because now they have to enthuse people about their product who are not yet fans of it because they practically helped develop it themselves. This means that the percentage of those who actually buy the product after they have become aware of it will decrease in the future. But this lower conversion rate from attention to purchase means nothing other than higher marketing costs.

And so one cannot simply extrapolate that the 7,777 units that were sold during the 28-day crowdfunding can now be sold every month thereafter. Or only with much higher efforts. And so it seems as if the founders’ huge community success is now somehow falling a bit on their feet. As a start-up, it is important to remember that pre-orders via a crowdfunding campaign can be seen by investors as an important proof of market, but they are not equivalent to sales. Also, sales that are gained via communities and followers with a very small marketing budget are rather less meaningful than paid marketing, which practically already has the form that it needs for the overall market. Because if such a funnel is already in place and only needs to be rolled out larger, the risk for the investor that it will not come to the famous hockey stick is much lower. And so a higher valuation would then probably also be accepted.

Nevertheless, all this does not diminish the success of the founders, only the evaluation. And so they received three offers, albeit at much lower valuations. Not for the first time in the cave, the audience experienced an advisor who called for tough negotiations, because after all, there was a competitive situation here that had to be exploited. But in this case, the founders gambled away, played their poker too high and all the lions backed out at their low concession of 12% without making any further offers.

It was a pity, because it almost seemed like an undignified end for this exciting case. But it was definitely not the end of STUR.