Early-stage startups in particular need to base their valuation to a large extent on future prospects. That is why financial planning is so important. This is where the investor sees where the figures come from and tries to assess how realistic it all is. This is where the opinions between the startup and the investor often diverge. In the case of Classplash, DHDL viewers also had the opportunity to experience such a discussion. 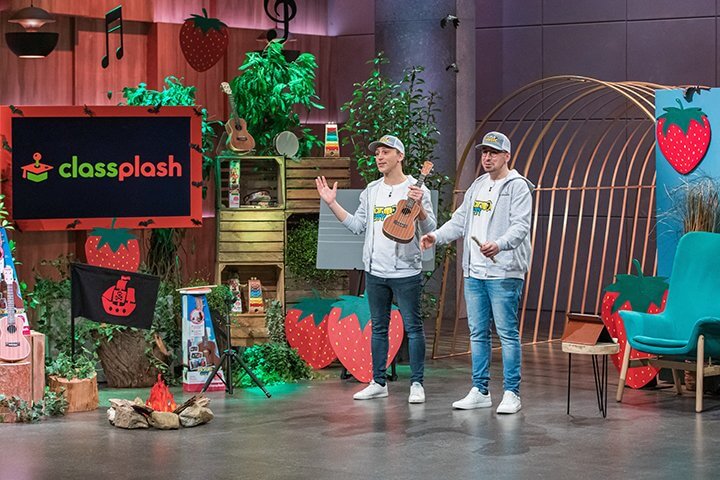 With their offer of 350,000 euros for 10% of the company shares, the two founding brothers of Classplash were already at least in the middle range of the valuations you normally see on „Die Höhle der Löwen“. And they had to take a lot of criticism for this 3.5 million post-money valuation.

The lions reasoned mainly by saying that the figures were too weak so far, although at first glance everything didn’t sound so bad for the music-learning start-up.
The brothers had a lot going for them: learning apps that were supposed to finally make it easier for children to learn music, an award as the most innovative teacher in the world for precisely this concept, 350,000 downloads in various countries, a good margin and steadily increasing sales.

But it was precisely the latter that Nils Glagau acknowledged with a „But that’s weak“. The company had already been on the market since 2017, had initially turned over 25,000 euros, then doubled its turnover in 2018, as well as in 2019, so that it was already able to show 101,000 euros. In 2020, however, it remained at 110,000 euros. After two doublings in a row, that really does look a bit weak at first. We can be sure that the lions have asked here what exactly the reason was, but the answer will probably not really have led them to a different opinion.

As a founder you can remember: You should always look at your own figures and be able to argue well for any slumps in growth, especially if you are asking for a high valuation. If growth has only been linear so far, you should think about how you can credibly demonstrate that you will soon be able to reach the famous hockey stick of exponential growth.

If you have been on the market for several years like Classplash, you also have to be aware that only the last annual turnover is used to calculate the famous „multiple“. This involves looking at the factor by which this turnover must be multiplied in order to arrive at the valuation. Ralf Dümmel strongly criticised the high multiple of over 30. There are financing rounds, especially in early phases, in which such a multiple is accepted by investors, albeit very rarely. But then everything really has to fit.

A very important point in the valuation justification is the funnel. Here you could also see that Carsten Maschmeyer wanted to reconstruct it exactly. Step by step, he had the founders explain that they had reached 350,000 downloads so far, but that these users did not pay at first. An average of 10% of them converted into paying customers, i.e. about 35,000, which is still not bad at all.

But that is only one facet of the business model, after all, there are also the „bundles“ where you can buy a flute directly. These are sold with a margin of 10-13 euros for around 23 euros. These are not bad values either.

But all this is not enough against the background of the current turnover, even if the founders emphasise that it has just really picked up again and the return is also below 4%. The individual key figures of the business model are therefore good, and could perhaps convince an investor to put energy into building up sales, if it weren’t for the high valuation. Because at this valuation, which is more than 30 times the current annual turnover, the company still has to grow very strongly for the investor to ever get his money back. And this possibility cannot be seen in the current growth.

In retrospect, Judith Williams will note that this business model could make billions as soon as the sales funnel is right. But that’s exactly where things are lacking, and Carsten Maschmeyer also lacks the corresponding expertise in the team, which is why he finally says „I’m out“.

But the founders were not completely planless; they believe in the great growth that will come in the future. Above all, they are building their hopes on a „magic flute“ edition of their flute bundle, which they say even the famous director Roland Emmerich wants for his film of the same name. They want to make over 800,000 euros with it alone.

But this is too uncertain for the lions, even though this partnership is definitely impressive. Because even merchandise for a very successful film doesn’t do well per se.

And so, the reasons for the expected big growth are ultimately too weak for the investors to make a deal, the rosy future still too shaky. In such cases, one likes to say: there is simply too much future in the valuation. Even if one really wishes for the committed founders that their dreams may come true.