Fun with Balls/Lymb.io: The Corona Crisis Factor in Valuation #DHDL

The anti-Corona measures have also often hit start-ups especially hard. Those that were able to survive the months-long closures of entire sectors by adapting quickly then often needed the next round of financing sooner than planned. But most of them are worse off at that point. So how does one deal with such a collapse in turnover through no fault of one's own when it comes to valuation? 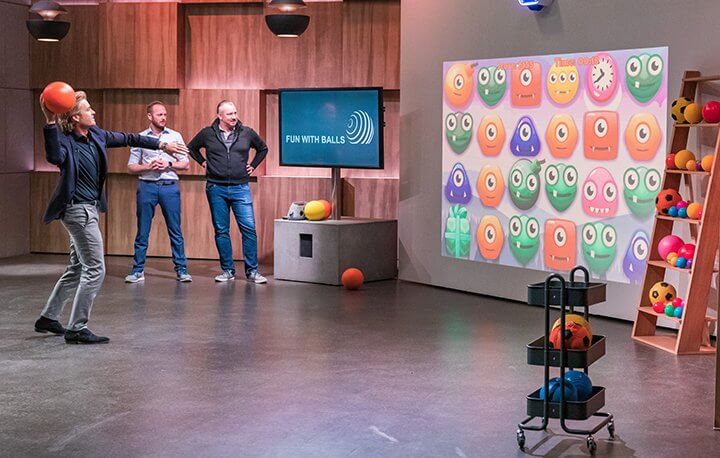 Fun with Balls, now Lymb.io, was absolutely transparent with its own situation when they came to “Die Höhle der Löwen”. The system, which makes it possible to combine computer games with real sports and thus wants to finally get even the laziest off the couch, used to address mainly establishments like hotels and gyms because of its size and a price starting at €5,000. But it was precisely these that were hit hardest by the pan-dem measures. After a strong start in 2019, the startup experienced an almost unimaginable slump in demand. From a turnover of 1.4 million euros, it went down to 810,000 euros, even though at the end of 2019 everything was pointing to strong growth.

Now they came into “the cave” and wanted 1.6 million euros – at a valuation of a whopping 16 million. It was clear that this made the lions swallow at first. And it was also clear that the valuation would definitely become a topic of discussion.

And the founders also brought their latest product with them: Lymb.io is practically the variant for the home, a kind of game console that, combined with a projector, enables a similar gaming experience on any free wall. From now on, it is primarily private customers who are to be addressed until the original business segment is up and running again.

Many viewers will now have prepared themselves for a tough valuation discussion – because if you take the pre-Corona turnover, you still end up with a good 10-fold multiple in the proposed valuation. But since the founders only offered 10% of their shares in the initial offer, an investor could easily halve or triple the valuation in a counter-offer. And the founders could counter with various arguments. Previous investments with avoidance of a downround, current sales pipelines and larger distribution partnerships could certainly play a role here.

But this does not seem to play a role, at least the viewer learns nothing about this. Because although all the lions praise the system itself and Judith Williams in particular seemed very enthusiastic about her test, the rating seems so high that it doesn’t even come to a negotiation. Carsten Maschmeyer calls the company a „Corona loser“, which the founders don’t even contradict. He also says that their valuation is that of Corona winners. Of course, this can be interpreted to mean that Corona winners are those whose business has not been greatly affected by the measures. Because as we saw in the Porthy case, for example, investors often don’t like it when a start-up jumps completely on the pandemic bandwagon. Because here you have to reckon with sales plummeting as soon as the situation changes again.

But „normal“ continued to be the case for almost no start-up. Many in the field of e-commerce and delivery services saw enormous growth, but this cannot last. Others saw a significant decline in turnover. For those who were able to reorient themselves in time, it was ultimately just a bend. But how does one then evaluate this kink? It would not be fair to include only the new business model in the evaluation, as long as the old one still exists and can pick up speed again at any time. Most start-ups would be very happy if the effects of the Corona measures were simply „factored out“, i.e. if the curve were practically continued and the valuation applied that would probably have been reached under normal circumstances at the current time. But it is not only in „Die Höhle der Löwen“ that investors are very rarely prepared to do this. And who could blame them, after all, no one can say when and if things will return to „normal“, or whether some sectors of the economy will not have changed permanently. Or even consumer behaviour.

Of course, that’s not fair somewhere; after all, this is a situation that could not have been prevented by any start-up in the world. And so one could also compare it to other sales slumps that are completely not one’s fault and that can only be predicted poorly or not at all. But here, too, investors are rarely willing to completely ignore the kink in turnover. Most, however, settle somewhere in the middle between the actual and the would-be situation. The less recommendable ones, however, take advantage of the resulting financial pressure on the start-ups to further depress the valuation.

Of course, this has never been observed with the lions, and the valuation of Lymb.io could also be understood more on the basis of the continued revenue development, which looked very strong especially at the end of 2019. Unfortunately, we don’t learn anything more about the exact calculation, but only see the lions exit with the valuation justification.

Lymb.io has now even completely replaced „Fun with Balls“ as the company name and the home systems are already available for pre-order. So let’s keep our fingers crossed that they will end up being one of the start-ups that only had a bump in growth and a successful transition. And that they will thus be able to pursue their mission of finally helping people to move more again for a long time to come.