A case that revealed the abysses of the Corona measures. An entrepreneur who had the rug pulled out from under him. But despite all official promises, the state and the banks left him completely alone. But who simply did not want to give up. And finally turned everything around once again. 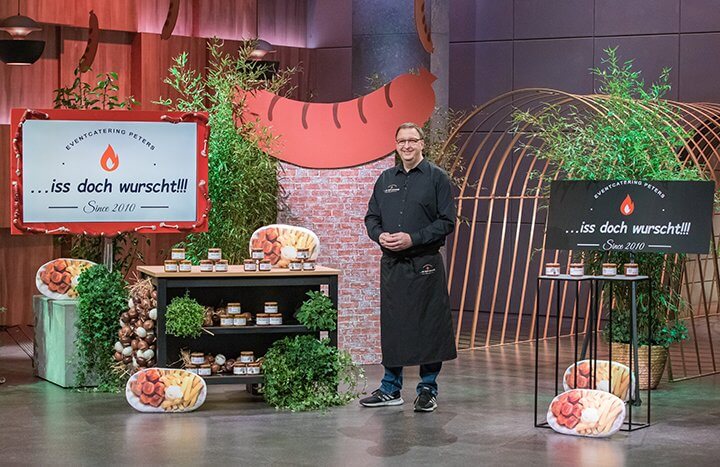 Ralf Dümmel was already excited before founder Marco Peters even came into „Die Höhle der Löwen“. Of course, because his products were already on display: it was about one of Dümmel’s favourite dishes, the famous currywurst.

But neither he nor the viewers would have expected such a touching story. A story that got under the skin, even moved many to tears, and yet is a mirror of our times. A time of the fight against the pandemic, but also a time of the effects of precisely those measures. Effects of which one sometimes has the impression that it is not appropriate to speak about them at all, and yet they are there. And they hurt.

The story of Marco’s family business makes clear what else is happening apart from the infection figures: the struggle for survival of entrepreneurs with „occupational bans“, as he himself called it in the programme. His successful food truck stopped bringing in revenue overnight. 250 events were cancelled. Without any replacement, without any prospect of when or how things could get better. Carsten Maschmeyer asked after the pitch if there was no state help. Yes, the founder confirmed. „In writing“. What this simple statement foreshadowed subsequently became increasingly clear: at least until the recording of the pitch in early 2021, the state had not paid out a cent of the promised Corona aid to the founder. He had to get through over a year almost completely without turnover entirely on his own. And he also said that the aid would not be paid out again if the company became insolvent in the meantime. Insolvent due to bans and missing compensation payments, through no fault of their own, just saying.

It was Carsten Maschmeyer again who asked the obvious question, whether nothing could be done about a bank loan in the case of a payout that had already been confirmed in writing. No, said the founder. The banks knew the problem and remained firm, because there were too many of such cases. Another abyss of state action, entrepreneurs as victims of bureaucracy.

But Marco Peters did not give up. Like a last stand, now comes the big turning point of the story, in which the hero once again gives his all. A kitchen was rented, and the award-winning recipes were preserved, filled into jars, and a first small batch was delivered to a friendly REWE 3 days before Christmas. The agreement was to see how the new product would sell by New Year. But things turned out differently. Hardly had he returned home from the delivery when the phone rang. No, there was nothing wrong with the products, on the contrary: they had already been sold out. When could he deliver more? 11 other REWE stores in the area jumped on the currywurst bandwagon. The first sales in well over a year, and the first real ray of hope.

But for it to really work, more is needed: more stores, cheaper production, efficient logistics. „It’s all or nothing for us“ says the founder, and therefore offers 49% for €49,000. An almost too good offer for his success so far, but you can tell he’s serious: this is his chance to turn everything around after all. And he really doesn’t seem to be the type to give away this chance to his ego.

At some point Ralf Dümmel simply stands up and symbolically offers his hand: he wants to do the deal as asked, and the founder agrees – symbolically, without the handshake, of course. The other lions would probably have made an offer too, but they let the currywurst lover go first without a murmur.
In the end, there were standing ovations from the lions for the great achievement of the founder, who fought his way out of an emergency through no fault of his own, from which the state had promised to help him. But it simply did not do so.

Ralf Dümmel not only pulled off the deal, but also subsequently gave shares back to the founder’s son. A real-life story that no author could have dreamed up. With an arc of suspense, a fantastic twist and a (hopefully only temporary) conclusion that is something truly special.

But not every story has such a happy ending. Most of them don’t. And even if the great wave of bankruptcies in the wake of the Corona measures has (so far) failed to materialise, there are still masses of entrepreneurs who have had substantial parts of their businesses, their plans, their dreams permanently destroyed, without any compensation. While celebrating those few who have made it despite all adversities, we must not forget the many who couldn’t.