In the case of the workplace-sharing platform "independesk", one could witness one of the strangest phone calls ever made in "Die Höhle der Löwen". Nevertheless, it ended well for the founder, because he finally brought the argument that made the most sense in his situation. 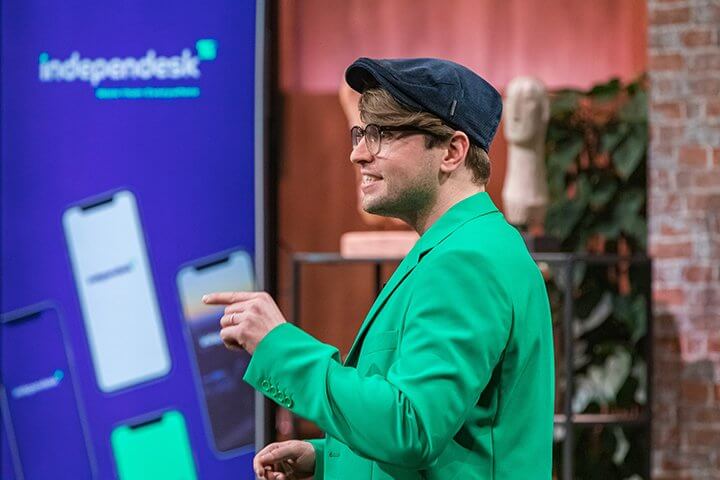 Practically all the lions present agreed immediately after the pitch that founder Karsten had hit the nerve of the times with his business model. A platform on which you can book workplaces by the hour, which are also billed precisely. This way, coworking spaces, whose business model is this anyway, can further utilise their capacities. But companies, cafés, restaurants or hotels with temporary vacancies can also earn some extra money this way, but are probably also increasingly using this opportunity to increase their profile.

The founder firmly believes that the number of flexible workers will continue to increase, even if at the moment freelancers, who are classic for this type of work, still make up the majority of his users. But the lions see it the same way, they believe that the socially and above all environmentally very desirable change towards more jobs close to home will come.

Although the individual founders can only show relatively small figures so far – probably due to the long lockdown in Germany – only Ralf Dümmel is dropping out because it is simply not his business model. All the other lions form up to make offers: Carsten Maschmeyer, together with Dr. Georg Kofler, initially offers the desired €150,000, but the two want 25.1% instead of the 15% offered. They particularly like the founder’s internationalisation plans and emphasise how strongly they can support them. Dagmar Wöhrl then offers the same amount for 18%, and finally Nils Glagau offers the founder exactly the deal he wanted. The first two lions then increase their offer to €251,000 for 25.1%, so that it is exactly the same valuation of €1 million that the founder had envisaged at the beginning. Dagmar Wöhrl also joins in and even offers a slightly higher valuation: €200,000 for 18%.

So there is already plenty of action before the founder makes his phone call. He calls his friend and advisor, as he says.

But he surprisingly only focuses on the offers, the lions seem to be completely unknown to him – at least based on what the viewer gets to hear. He describes the double offer from multi-investor Carsten Maschmeyer and media professional Dr. Georg Kofler as not really interesting because it lies outside what the founder probably imagined. Nils Glagau’s offer therefore fits pretty well, and in Dagmar Wöhrl’s mathematically even better offer he sees a matter of conscience. What he means by this unfortunately remains hidden from us.

After a brief shift to the lions, we only hear the founder ask whether he can ask for that. The consultant’s answer sounds almost like a commercial for a motivational workshop. He has three questions for him, he says. Whether he believes in his product, in his figures and, above all, that he is the right person to implement everything as planned. The founder dutifully answers yes, and is then asked to negotiate hard. Which he does.
The lions will later say that he has elegantly ripped them off, but the founder makes a decisive argument.

Although his advisor’s comments did not suggest it, he is primarily targeting the double team; unlike him, he knows the lions and has given them some thought. He argues that he will probably need several more rounds of investment if he really wants to become big, and therefore does not want to give away so much at such an early stage. He now even „worsens“ his offer and wants a whopping €200,000 for 15%, but with a right of first option to buy for the next round – unusually, even more than just compensation for the dilution, namely up to the desired 25.1%.

The lions seem to agree, but with an addition: they then want a discount on the next round of 20%. What sounds like a small addition can, however, make a huge difference. Because if independesk actually manages to achieve strong growth – also with the help of the lions – and can reach a valuation of 5 million euros in the next round, for example, the lions will get their turn first, but only pay a valuation of 4 million. If the start-up then needs capital of at least 1 million euros to grow further, it would normally have to give up 20% for this, but now mathematically 25%. And at such a reduced valuation, they can then not only get a few percent against dilution, but another 10.1% more.

We cannot be sure whether the founder was aware of this. In general, however, start-ups should be very careful with discounts and not grant them too quickly before they have thoroughly calculated and thought through everything. Depending on the constellation, a somewhat lower valuation but no discount may be better in the medium term already. But you certainly shouldn’t let a few old-fashioned motivational slogans push your ego to the point where it stops you from calculating.

Hopefully, that did not happen in this case, and it simply remained a strange conversation during an otherwise successful performance. All in all, the founder now has two new investors on board who will support him with more than just money, and hopefully give independesk the growth spurt he was hoping for.