A good team, a high willingness to take risks, but no entrepreneurs. A lot of potential, but no precise planning. Hardly any turnover, but good user numbers. And a business model that is not yet fully developed, but a high valuation. Many German founders probably think "USA" here. And indeed, the main founder of Lambus worked in Silicon Valley for four years. Can two such different start-up cultures be brought together? 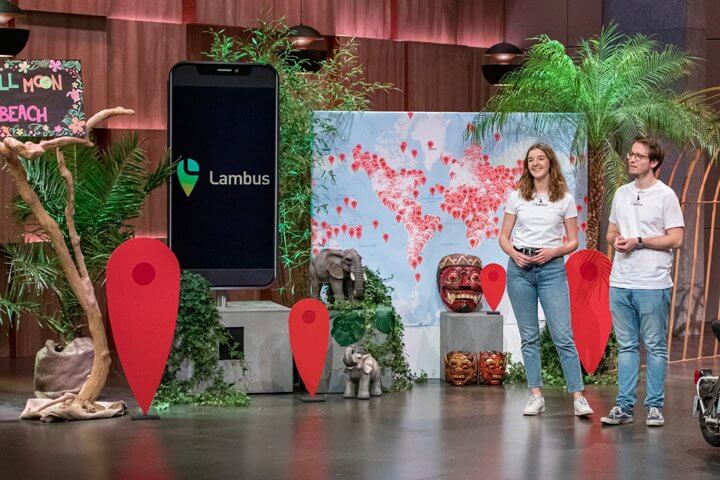 The idea: an app that intelligently combines travel planning, bookings, storing all documents and accounting and makes it much easier for the user. Group trips in particular should be able to be planned with considerably less effort. The founders Hans and Anja proudly tell us that they have already gained almost 60,000 users.
The figure makes the investors sit up and take notice, and Carsten Maschmeyer immediately shows that he knows his way around this kind of business model, because he asks several questions in one: whether these users had also registered, or what exactly was being counted here? How many journeys had already been created in the app by the users and where they monetised?

In fact, there are many more aspects to this than might be assumed at first glance. Of course, the question about registered users is to be taken literally at first; the lion certainly wanted exactly this information at this point. But there are a few „side effects“: If investors ask this question, they often also want to see whether founders are willing to mix the terms a little to perhaps look better. Or even if they don’t really have their numbers under control. Because founders like to cite downloads as users once in a while, but this is simply not correct. Because there are always direct app deletions after the download. Even if these are very low, potential users are already lost here and you have to plan and work with a conversion rate. Founders should therefore always be 100% correct and transparent with investors and have dealt with the common terms beforehand.

But the founders can confirm this, the users they spoke of are all registered. They have also created a total of around 50,000 trips via the app. Carsten notes that this is practically one trip per user. So, he is practically already reckoning with a kind of average conversion rate for travel planning here. On average, almost every registered user actually uses the app, which indicates a high activity rate. Strictly speaking, one would still have to look at the exact distribution, i.e. whether there are, for example, many users who create several trips and quite a few who do not even start planning. But for a start-up that has not been around that long, one can assume a fairly balanced distribution for the time being.

However, such activity metrics are extremely important for evaluating the business model: are people really using the app, is the concept catching on? Good activity metrics can be a first step towards proof of concept, even if you still need to find out a lot more about your users to build a working business model.

Because when it comes to the question of monetisation, things are a little weaker at Lambus; only a few partners are connected, who offer their services and pay a kind of commission for them. Although further talks are underway, the founders do not want to commit to revenue forecasts, even if the lions ask several times and Dr. Georg Kofler then even drops out.

But the founders are mainly targeting Carsten Maschmeyer anyway, as they admit a little later.

However, the big investor is sceptical: a travel start-up in the middle of the pandemic and then also with a rather high valuation? Monetisation still seems a long way off here, but the founders insist on their good user growth and the activity rate.

Definitely a rather American approach: think big, win many users first. But the founders have not lost their footing in Germany: they already have partners and are in the process of further acquisition, and they also explain their plans for a paid pro version. In contrast to many Silicon Valley start-ups in such a phase, the business model is clear in principle, it’s just a matter of details.

Carsten Maschmeyer is finally persuaded; he thinks the founders are good, even if he doesn’t quite perceive them as entrepreneurs yet.

But he wants 25 instead of 15% from the founders plus a „Corona milestone“, after which only the second half is paid out. A tough negotiation begins, and finally an agreement is reached on 18%. Which is perhaps less the exuberance and influence of American founder self-confidence than the knowledge that there will be further rounds with such a model if it is to be successful.

The foundation stone could now be laid, after all, the broadcast happened just in time for the expected summer travel wave.