The last start-up to be broadcasted in season 9 of "Die Höhle der Löwen" has it all over again: a not-so-simple business model that first has to be explained. A lion offer that has never existed before. An investor who is breaking new ground. And finally, a lion who drops out in order to enter a battle of the combined offers with another lion at the end. 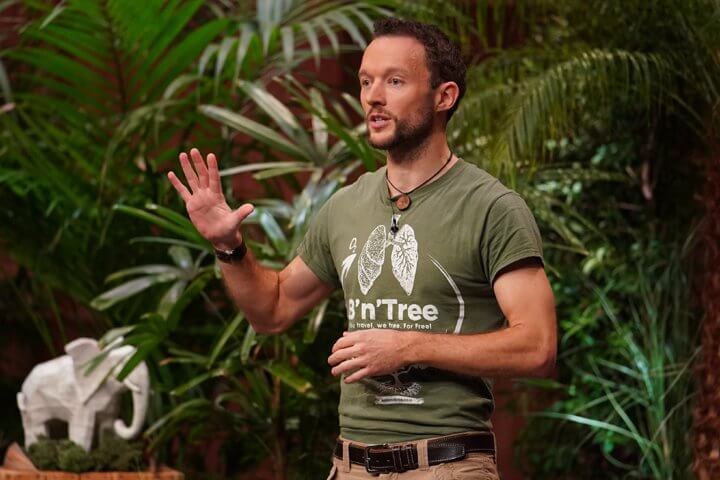 Yes, the audience was offered a lot of action before the summer break. And a topic that leaves no one cold.

With his company „Click’n’Tree“, founder Chris wants to help plant more trees. But unlike non-profit organisations, which also have to rely a lot on volunteer work, he wants to build a scalable business model out of it.

He started with an almost „classic“ affiliate model in the travel sector: via the B’n’Tree website, users can go to various travel websites. If they then books something here, B’n’Tree receives an affiliate commission as an intermediary. Unfortunately, these are not particularly high in the industry, and so on average about 4 € per booking are paid out. Since the planting of a new tree can be realised for around 3.50 €, the model is roughly sustainable, but it is easy to calculate that it will be rather difficult to scale the model for the 50 cents that remain here on average.

That is why the founder has expanded his model and now partners directly with large companies, not only from the tourism industry.

He sells the planted tree for 5 € – so the margin is slightly higher and the partners do the marketing for their own project. With more than 100,000 trees planted in 12 countries and a well-filled pipeline on the corporate side, the model is already off to a good start. In his first full-time month for Click’n’Tree, the founder alone managed to acquire 6 new corporate clients, which made him even more optimistic for the next year.

The lions think it’s a great idea. But Nils Glagau thinks the business model is still a bit too vague; the two current models don’t seem entirely clear. Carsten Maschmeyer also asks again what exactly the USP is.
The founder uses his neologism „caritalism“, which means doing good, but on a highly scalable scale – and earning money with it. Besides, there is another positive effect: jobs are created, one is not dependent on charitable work to fulfil the orders. Because that would always limit growth in some way.
And what SirPlus and LetsAct couldn’t really get across, the founder, who has already lived and worked on five continents, manages to convince the lions that he has built the right model to do good, still earn money with it and ideally make the whole thing as big as possible.

He sees himself neither as an environmental activist like Greta Thunberg nor as a full-blooded capitalist like Marc Zuckerberg, but as a mixture of both. This at least makes for sympathetic laughs but was perhaps also precisely the explanation that fully convinced some lions of the founder and model, who were persuaded by the argument that only the healthy middle can also be truly successful here.

Unexpectedly for many, Judith Williams in particular then shows undisguised interest. „Is that something for you?“she whispers to her seatmate Carsten Maschmeyer. The two are whispering. And finally make an unprecedented offer in „Die Höhle der Löwen“: they offer the requested 75,000 € but want 25.1%. But they only want to have their money back at some point, if things go well, and not make a profit. Therefore, this 25.1% is to be distributed to future employees as part of an ESOP programme.

This sounds complicated, but it is actually a very elegant solution. If employees are to participate in the financial success of a company, they often receive so-called virtual shares within the framework of an „Employee Stock Option Programme“, or ESOP for short. They do not actually own any part of the company, which means they cannot exert any influence at the shareholders‘ meeting. But if, for example, the company is (partially) sold, they get a share of the pie equal to the percentage of virtual shares they own. Normally, this share is then deducted from the founders‘ share, because someone has to get less money if there are suddenly other beneficiaries who are not actually no real shareholders of the company.

Here, however, the lions offer their shares of the financial profit – minus their investment – for distribution to the employees. This is actually a very simple and elegant solution that can be solved with relatively little text in the shareholders’ agreement.

But it is remarkable how effectively the lions ensure that they will not share in the profits.
But Georg Kofler and Nils Glagau – who was initially already out at this point – see it differently: they like the founder’s thinking and are competing for the deal with their offer of €100,000 for 20% – so they even offer a higher valuation.

After the founder only reaches his mentor’s voicemail – which has probably never happened before as well – he decides on the combination of Judith Williams and Carsten Maschmeyer – and thus gets the investor what is probably her most technical deal to date.

She is pleased, as she expects a lot of praise from her daughters. „Mum, that’s the most sensible start-up you’ve ever done,“ she hears them say. So at the very end of the season, there was another pitch with so many first-time-events that it is a record in itself.

And a worthy conclusion to a season that has been shaped so strongly by sustainable business models as none before.