Even before the pitch, the lions were overflowing with superlatives about the gaming market. The backdrop of the start-up Zaunkönig left no doubt as to what the pitch would be about. But such an exciting market also harbours dangers, as became clear a little later. So even a start-up in the gaming sector has to offer a lot more. 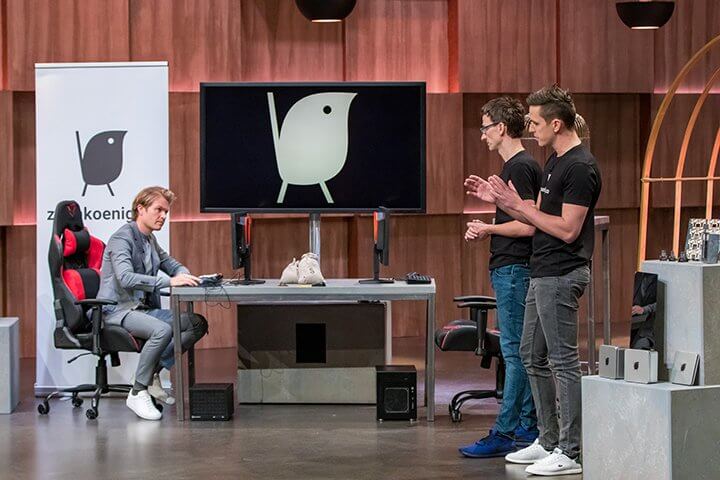 The pitch of the brothers Dominik and Patrick quickly introduced even non-gamers to the topic. And not only investors, but also spectators quickly realised: these founders are in a really exciting field. Comparing the prize money of large tournaments with the prize money of Wimbledon made it clear at the latest what is so special here: for most of the population, this market is hidden, neither participants nor content are even rudimentarily known to many. But the money that is moved here by far exceeds the amounts in many popular sports.

Reason enough for the lions to take a close look at the brothers‘ product: A gaming mouse for the really enthusiastic and above all the professional gamers. And not just any gaming mouse, but the lightest in the world. With the help of carbon and the reduction to the most essential parts, a mouse was created that is also way ahead in terms of reaction times.
But despite these prerequisites, the lions remained sceptical, and points of discussion were above all the (still) missing mouse wheel and the disadvantages that such a small and light mouse could have. After trying it out, Nico Rosberg in particular complained that he missed the feeling of control of the standard models, which are up to 5 times heavier.
But the founders did not admit defeat; they held on to the advantages of lighter weight. The scene would rethink, because milliseconds in reaction could make the difference between victory and defeat these days. Professional gamers already gave good feedback, and after all, there was already of € 35,000 in just 2 months with the mice made in their parents‘ garage. Also, the big manufacturers would already try to jump on the bandwagon and produce mice with less weight.

But it was precisely the big manufacturers that made at least Dagmar Wöhrl drop out. In such a large market, you are always up against very large competitors. Should they realise that they could miss out on something here, they would quickly follow suit.

But Carsten Maschmeyer and Ralf Dümmel were already talking to each other. The threat of competition from big players was also a topic in their conversation. In the end, however, they decided to make an offer anyway. What might have prevailed in this case?

One can only speculate here, but anyone who knows the gaming market more closely knows that it has other special features in addition to its extreme size (in Germany alone it is estimated at 5 billion euros) and good growth. For example, the structures are relatively clear due to the games with a large number of followers, even if there are of course overlaps. In addition, there are very well-known figures within the scene who can act like celebrities or influencers in marketing. Many are even known to have very high conversion rates, which means that products recommended by them, at least in the gaming sector, are quite likely to be bought by their followers. So with good planning and identifying the right partners and advertising faces, there would probably be a good opportunity not only to get by with relatively low customer acquisition costs for the high-priced product, but also to penetrate the scene quickly and efficiently. In the best case, one even becomes a trend product that creates a certain hype. Even the big players in the market will then have a hard time.

But for this to work, you need strong partners who know how to act quickly and can also build up a good scalable production. The founders of Zaunkönig would have found them after their deal with Carsten Maschmeyer and Ralf Dümmel. Unfortunately, the deal wasn’t realised later. Let’s hope that the start-up will soon be anyway able to stir up the „crazy market“ of gaming as a new player.