MyEy: A market too niche or a really exciting market after all #DHDL

The big plan: to finally send chicken on permanent holiday, to abolish battery cages as far as possible. But at first things didn't look so good for master confectioner and baker Chris Geiser. The taste of his vegan egg substitute was not really convincing as a fried egg. Dr. Georg Kofler then thought the market was too niche. But the tide turned and finally, there were two offers. Why were the other lions convinced by the market? 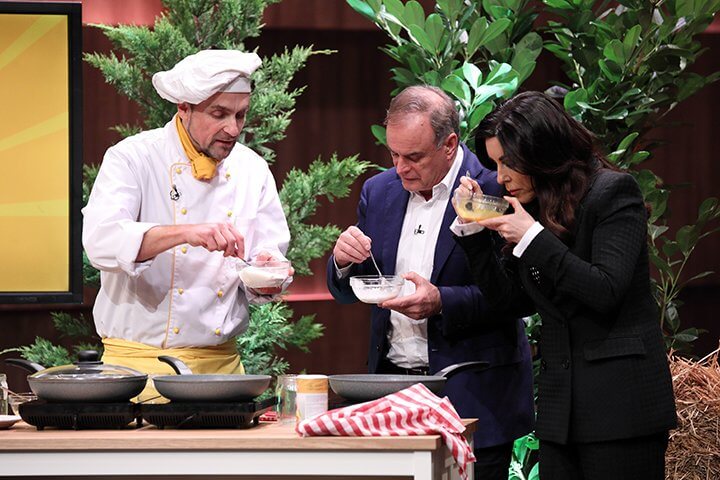 Of course, it was also the MyEy founder himself who was convincing. A vegan himself for 25 years and a baker and master confectioner with his own bakery, he has been working on vegan alternatives for baking for two decades. Eggs were the biggest challenge. And even though there are more and more substitute products: They can practically never be whipped up and used simultaneously to an egg in recipes. Chris wanted to change that, and the lions were not only allowed to prepare the result themselves on the cooker as a fried egg, but also to taste it in other forms.

Most of the lions started with the fried egg, but it didn’t really convince them: For Carsten Maschmeyer it tasted “like something else” and Nils Glagau liked neither the consistency nor the taste.

The former, however, immediately put his statement into perspective, because for him, meat substitutes often taste best when they actually taste the least like meat. Judith Williams then suspects that the sweet dishes are perhaps better, and indeed: the lions are enthusiastic and praise the macaron and the other sweet variations very much.
The mood seems to be saved, because prices and sales of about 120,000 € per year seem to be right. But then Dr. Georg Kofler finds that the 2 percent of vegans in the German-speaking countries are too few and the target group too narrow for an investment.

A certain scepticism also seems to grip the others, especially with regard to the unique selling proposition. The founder has to take a few attempts to explain that it’s all about binding and whipping properties that no competing product can offer. It is these properties that make it possible to simply replace the eggs with the MyEy powder in practically every recipe.

Almost in passing, he then mentions that he was able to protect his development with a patent. But he can’t finish this sentence, so much does the mention of the patent upset Ralf Dümmel. The lions then asked a few times and the founder confirms that it really is a patent, that it has already been granted and what exactly he was able to patent. But why is this so extraordinary?

Patents in the food sector are extremely rare, because it is very difficult to enforce protection here. Recipes are therefore usually protected by keeping them as secret as possible. As a result, most products in this sector can be copied with a certain amount of effort, which would have to be reckoned with in the case of MyEy. After all, the competition would probably also like to make vegan meringue caps possible. But that will probably be very difficult with the patent.

Nils Glagau finds the whole case very exciting and exactly matches the founder’s starting offer: 150,000 € for 15%. Judith Williams is also full of praise and believes that the proportion of vegans will increase significantly. She drops out, however, and her statement only suggests that she simply does not want to enter a big bidding round. Because in the background Carsten Maschmeyer and Ralf Dümmel are talking, who then also bid 300,000 € for 30%.

Ralf Dümmel then also explains that he was interested practically from the beginning, because he sees the market quite differently than just the proportion of vegans in Germany. He knows the triumphal march of vegan and vegetarian substitutes that has been observed on supermarket shelves in recent years. And he simply believes that such egg substitutes, like meat substitutes, could attack the original products. And after all, a large part of the approximately 15 billion eggs consumed in Germany each year are processed. This opens up a much bigger perspective.

But despite the double offer and the internationalisation possibilities offered by the two lions, the founder finally decides in favour of Nils Glagau – out of his gut, as he later says.
Let’s hope that his gut feeling really does lead to numerous more chicken being sent on permanent leave.