The start was good, the portable tripod was particularly well received by amateur photographer Dagmar Wöhrl. The Q&A session also got off to a promising start, but then the talk turned to the figures and the dream of a lion deal was shattered. The founders were surprised by the details of the questions. But did the lions really "corner" the founders? 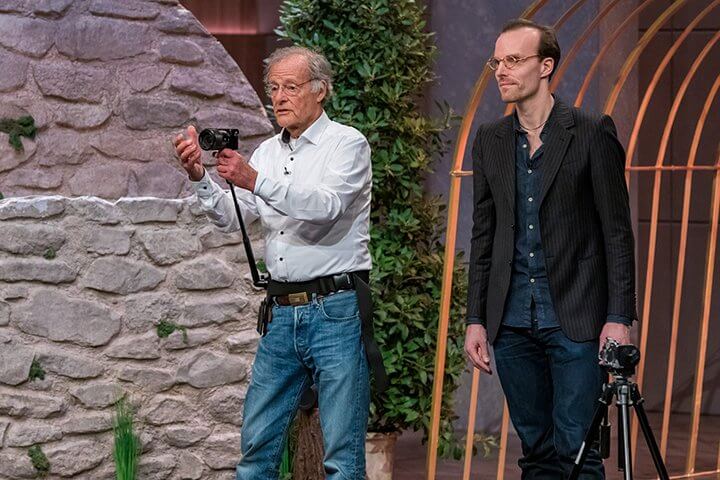 A camera tripod that is portable, quick to use and not very bulky: for many ambitious amateur photographers and professionals, this is certainly an absolutely great product. This was also the opinion of the lions when the founding team of father and son presented their start-up Steadify to them.

Everyone seemed very interested, there was a lot of praise especially for the 83-year-old former photographer Gert, who presented breathtaking pictures from his career. So, the professional component regarding the product could not even be questioned.

But those who know the lions know what comes next: the numbers. And they were to turn the tide.

Everything was still going smoothly with the production costs and the sales price, and the high margin naturally pleased the lions. The founders also proudly mentioned their turnover via a Kickstarter campaign of over €200,000. However, the first surprise came immediately afterwards when they had to admit that they had hardly realised any further sales since then.

The reason then caused the first big frown: they had been “financially exhausted” after the crowdfunding.

Only after repeated enquiries a reasonably clear picture emerged: on the one hand, there was probably an advertising partner who started working and afterwards invoiced a high price. This alone, however, was not very convincing, because from such a high margin as the founders had previously stated, there should still be something left, even with quite elaborate advertising. Otherwise, they should have taken countermeasures in time, because customer acquisition costs that are too high can destroy an entire business model. And founders tend to forget that every customer costs money first.

Then the founders added the explanation that they had had 5000 units produced in advance in order to be prepared for a big rush. However, “only” 1500 units were sold during the campaign. So, they had a full stock, but no more money to market this stock.

This can happen in principle and is not a deal-breaker for investors. However, as a founder, you should always be aware when arguing with numbers that your counterpart will start calculating almost immediately.

Also the lions don’t have their notebooks for decoration. At the $20 production costs quoted by the founders, the 5,000 pieces would have cost $100,000, so with a turnover of over €200,000, there should still be something left over, even with a really expensive crowdfunding campaign. So, either they overdid it with the marketing (as they did with the pre-order), or something is not quite right.

Which also makes investors wonder: If they had sold the 5,000 pieces at 130 € each (the price is calculated from the 1,500 pieces for a total of 200,000 €), they would have raised 650,000 €, which is an extremely high amount for a German crowdfunding campaign. An additional oversized advertising campaign would strongly indicate to most investors that the founders want too much too fast and do too little risk management.

So be careful: investors are used to making a few quick calculations and thus constantly carrying out quick checks to see whether what the founders are telling them fits together halfway.

It probably didn’t, because one after the other dropped out because of too many open questions regarding the numbers. Carsten Maschmeyer then asked again what the total turnover had been over the three years on the market. But the founders didn’t even have an answer, which visibly disappointed all the lions. Nico Rosberg expressed it as a lack of confidence in the business management skills, Dagmar Wöhrl as too many question marks in the figures.

Afterwards, the founders expressed surprise that they had to answer these questions at all. They were probably “not prepared to have to give such precise figures”. That’s surprising, since it was about figures that investors always, but really always, ask for, and which you could probably hear 100 times in “Die Höhle der Löwen”, as Dagmar Wöhrl also aptly remarked.

But founders can derive a central learning from this: When preparing for investments, whether in a team, with a coach or other sparring partners, you should do at least one run-through in which you manage completely without aids. Especially on the phone, the person on the other end often has no idea whether you are reading the numbers or know what you are talking about.

Numbers aren’t everything, but without having them under control, you don’t even need to dream of an investment. After all, investors have to have a chance to assess the business model. This really has nothing to do with “cornering”. As a founder, you should always reflect thoroughly on criticism that you don’t have your figures under control and not allow yourself to dismiss it too quickly. Because you can’t do it without numbers, no matter how great the product is and how much you love what you do. The bitter truth is that you need both, but one cannot compensate for the other.

The investor perspective was then summed up precisely by Judith Williams: “Numbers are the core essence from the lion’s cave.”