In the latest episode of "Die Höhle der Löwen", viewers once again got to see something that is no longer all that rare in the start-up show - as it is in the start-up world in general: very young founders. Johannes and Valentin had also started their start-up idea before they were legally of age. But since that is not possible in Germany, their grandmother had to found the company for them. You can think that's sweet, but actually it's just sad. 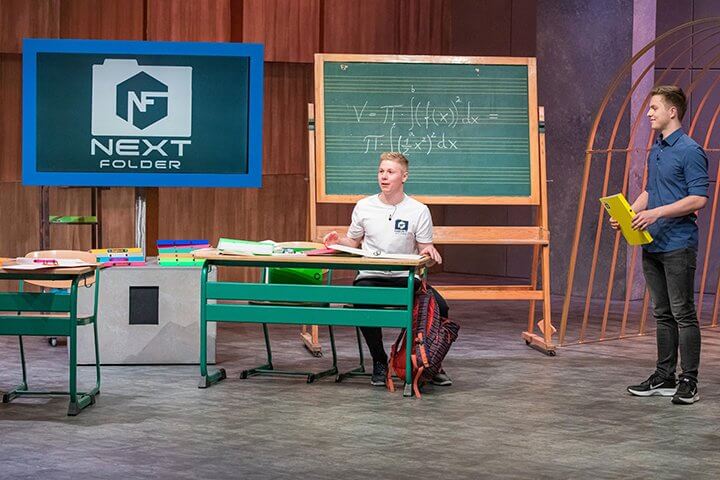 The two “Next Folder” founders were not the only ones, and by no means the youngest candidates on the show. And they also seamlessly joined the ever-growing number of extremely young founders who received a lot of praise from the lions.

Their latest-generation folder, which finally replaced the uncomfortable metal rings inside with flexible plastic rings that are even supposed to be 100% sustainably assembled in perspective, definitely got a lot of praise. Ralf Dümmel directly remembered his school days and how often he had pinched his skin painfully in the snapping metal rings.

He praised the fact that the founders solved their own problem by designing a folder in which you can write directly and where you don’t have to constantly unfold and refile the sheets. Although Carsten Maschmeyer is sceptical about doing this anyway, the founders confirm that they have extensively tested the folder, which is currently still produced in 3D printing, and had also started a survey on it, which gave them good feedback.

And although the founders are well prepared and seem to have an answer for everything, one lion after another gets out. Everyone attests that the two students of a sports high school have a good and self-confident, but likeable appearance, but cannot necessarily get enthusiastic about the topic of school material or do not see themselves as the right investor for it. Finally, there remains Ralf Dümmel, who somehow also seemed the most enthusiastic of all.

And anyone who remembers the writing learning booklet “Schreibpilot” at this point knows that he had already invested in learning materials and was quite successful with it. So not only does he have the right retail distribution channels, he has also already had good experience with how they can work for a start-up.

But he still has one last question: whether the two of them have already founded a limited liability company. Yes, a UG, is the answer. A capital company, which investors necessarily need in order to be able to invest, is therefore already in place. However, with one restriction: since they were still minors at the time of the foundation, grandma Margit founded the company in her name, but now wants to sign over 50% to each of them again, i.e. hand over everything without residue.

There is absolutely nothing wrong with such a thing if the investor can rely on everything happening as planned without any problems, which is to be expected in such a family constellation. And of course it’s also kind of sweet. But only on the surface, because what lies behind it is simply sad. Starting a business as a minor in Germany is very, very difficult and bureaucratic. In almost all cases, first the parents and then the family court have to agree after their application. That can go well, but many cases have come to light in which the family court has made it incredibly difficult for founders and parents alike. It is certainly not clear to everyone that this is a burden on the courts, because things like concluding a loan agreement are still reserved for minors anyway.

In an age of influencers, of digital business models, in which you don’t need anything more than a credit card and a reasonably fast internet connection to become an entrepreneur – ok, that’s still not a matter of course in Germany, as we know – you would think that things would be made a little easier for the next generation. But far from it. Don’t we want young people to stand on their own two feet economically earlier?

In the case of the Next-Folder founders, it is apparently okay for a young man to represent our country as an athlete at the Youth Olympic Games and the European Youth Championships and win medals there. But we don’t trust the same, obviously highly disciplined young person, who even develops start-up ideas on the side and does the relevant market research, enough to let him do entrepreneurial work? Or are we afraid that the youth will solve their own problems – as happened in the Next Folder case – and outstrip our old-established companies? Do we also prefer to see the next generation in the corporate hamster wheel rather than in a self-determined life?

In the case of these founders, the family was completely behind them, trusting them more than society and the state apparently did. But what happens when young founders are denied the approval of their parents for a start-up project? If there is no Grandma Margit to register the business in her own name, but otherwise has full confidence in her grandchildren? Then the dream of setting up a business is over until the age of majority. Just like that, not because you didn’t have a good idea, not because you didn’t have enough motivation or the wrong approach, but simply because you were born into the “wrong” family. And no, just waiting is rarely an option in our fast-paced times. It’s easy to imagine that parents with a high affinity for security and perhaps more educationally distant, less enlightened parents are more likely to forbid their children to take this step than well-situated academics. This then drives the gap even wider than it already is. Is this something deliberate?

Moderator Amiaz was absolutely right that such young founders are an absolute role model and an inspiration for other young people. Let’s hope that at some point German bureaucracy will finally stop putting obstacles in their way.

Ralf Dümmel, at any rate, has exactly the opposite in mind with his latest investment.