Our school and vocational training system unfortunately very often misses the actual need. In the meantime, there is a glaring shortage of skilled workers in many areas on the one hand, but no quick and high-quality education or training opportunities for those interested. This is the case with software salespeople. Dominik and Michael from Hyrise are remedying this situation. And obviously highly successfully. 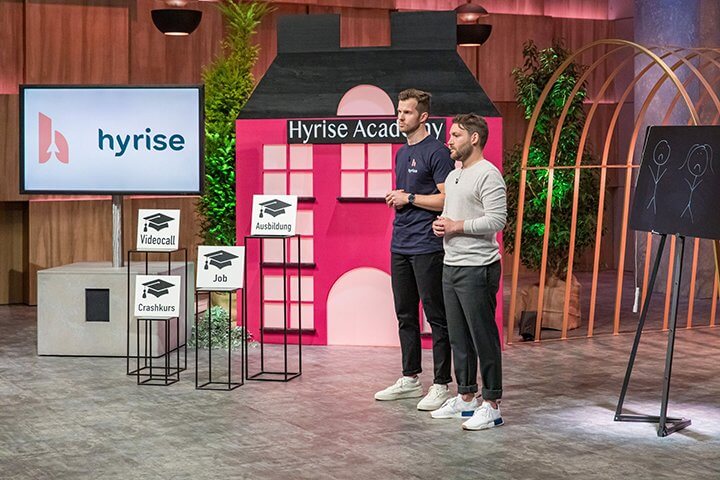 It is not the first case of this kind, nor are they the first founders to develop a scalable business model from such an idea. But it is an excellent case to demonstrate that even small start-ups can solve big economic problems.

Dominik and Michael are no longer completely novice entrepreneurs, both already have start-up experience, Dominik had even founded several companies before Hyrise. And he always found that good salespeople were hard to come by, especially in the software sector. There was simply a lack of training. Salespeople may often have a degree in economics, but not necessarily, and it is not a prerequisite, as Lioness Judith Williams also shows right now. At some point during the discussion, she also tells a little of her story, how she switched from being a singer to a saleswoman and how her path here turned out.

Ralf Dümmel and Carsten Maschmeyer will also intersperse their experiences, and it quickly becomes clear: sales is not something you can simply learn, especially because the training on offer is practically non-existent. Many people discover their passion for selling at some point, and the rest is “learning by doing”. A certain previous education is not really necessary, it rather depends on the personality of a person. But the right knowledge is indispensable for success.

Employees and companies alike would probably have a huge interest in learning the most important things faster and earlier in order to be successful more quickly or to save themselves long and expensive training periods. From the company’s point of view, there is also the fact that they simply have problems finding suitable salespeople. Small companies in particular do not have the means and possibilities to train motivated but completely untrained people themselves. This literally cries out for an intermediary business model.

This is exactly where Hirise comes in: employees who are dissatisfied in sometimes completely different jobs or simply people looking for a new career path are checked for their basic suitability. If they turn out to be a match for an advertised job, they are offered online sales training, a large part of which is then done parallel to the new job. The companies pay well for this: 5000 € for the placement and another 3000 € for the training programme – at least at the time of the recording of “Die Höhle der Löwen”. Compared to headhunters, as Ralf Dümmel also notes, relatively cheap.
The set-up is not necessarily new: start-ups like Codecademy have also been able to establish themselves in the IT sector in particular, where Germany has failed for years to create training opportunities that meet demand. In this case, the business model is different, because interested people learn a programming language entirely on their own initiative, while Hirise beckons with a well-paid job after completing the programme. In the case of the latter, it is precisely this that promises good growth figures, because companies are willing to pay accordingly. As long as this is available, start-ups in particular have a great field of action to counteract this deplorable state of affairs. Because, as the founders themselves said in the programme, sales is the growth engine of a company. If it can’t find salespeople, it won’t sell any more and will be at a standstill. If at all.

It becomes more difficult when the shortage exists on an even more abstract level, such as among the founders. Admittedly, Germany’s universities – though here mainly the private ones – have modernised in the meantime and offer start-up knowledge or even entire courses of study in “entrepreneurship” or similar disciplines. In some cases, the quality is rather mixed, as many lecturers find the field exciting but have a more classical business management background themselves and do not see the difference. To be fair, though, a few do it quite well.

However, basic knowledge for founders has hardly made it into the classical business studies programmes or even schools, and late converts have almost no chance to quickly acquire relevant knowledge. Perhaps it is not intended that young people discover their inclination and aptitude for self-employment at an early age?

Nor do they have a chance to discover their inclination to sell early on and to back it up with relevant knowledge. It is true that the need here is gigantic and there is also a willingness to pay, but in order to cover it and introduce people to this field, it still very often needs the help of chance, because it is somehow put into a kind of subcategory.

It was the same with programming, but here the extreme over-need has slowly brought movement into the rigid German systems. Very slowly.

Of course, one can also see the good side of it: As long as our education systems are too ponderous, there are opportunities for clever entrepreneurs. Like Hirise, which had a turnover of around 300,000 euros in the first 12 months and was already growing rapidly, making sales lions Judith Williams and Carsten Maschmeyer want more. After lengthy negotiations, the deal was struck: the founders were to receive 750,000 euros for 20%. Originally they had asked for 500,000 euros for 10%.

Due to a change in the business model on the part of the founders, which was unfortunately not communicated in the pitch, the investment did not come about in the end, as they probably no longer needed the money from the lions and therefore no longer found the valuation fair.

However, the placement of new sales talent will probably continue for quite a while. But there are still many other areas to be served, so it will be interesting to see what else is in store.