On both the startup and investor side, there is still a strong attitude that negotiations have to be tough. Many founders in particular believe that going in with a slightly higher valuation and then wrestling for every percentage point is simply part of the game. Investors, on the other hand, sometimes seem to see it as one of their core tasks to negotiate founders down a bit more in any case. But is this time-honoured, very patriarchal way of negotiating really the right one in this setup? In the Christmas episode of "Die Höhle der Löwen", the founders of Papydo show how things can be done differently. Why this could and should set a precedent. 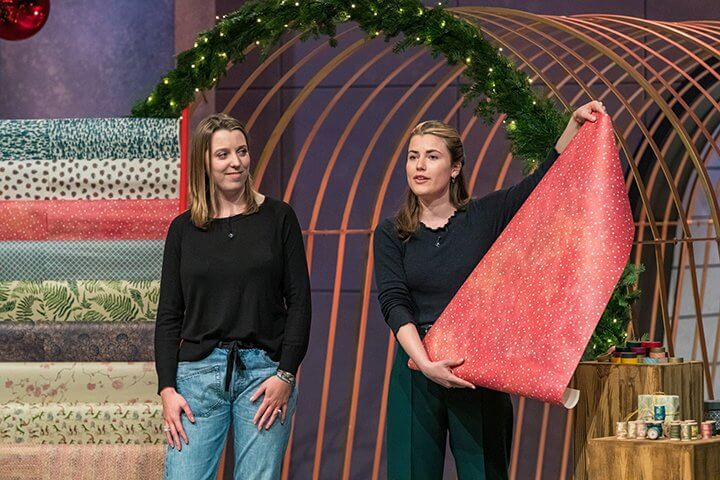 The two Papydo founders were beaming with Christmas decorations right from the start, but also delivered a perfectly structured and convincing pitch. They used a classic start-up pitch introduction technique: the entry about the big number. After all, 8000 tonnes of wrapping paper bought every year in Germany at Christmas time is a quantity that is hard to imagine. On the other hand, if you have any inkling of an ecological conscience, you don’t even want to imagine deforestation the size of a football field to meet this demand.

And so, at this point, lions and viewers alike are more than ready to hear the solution of the two young founders who want to finally counter this incredible waste of valuable resources. Because their wrapping paper is made of grass, which not only grows back faster, but also requires 90% less water, energy, and CO2 in production. Nevertheless, even allergy sufferers need not fear wrapping gifts with it. The necessary accessories such as ribbon, tags and even adhesive tape are also available in sustainable versions.

The lions are visibly taken with the idea, a negotiation is already in the air, even before it really gets down to the discussion of figures. But here, too, the two power women score points: 80-90% gross margin of their products, a price positioning at the upper end of the competition, but still within the range already established on the market.

The turnover of the start-up is unfortunately withheld from us, this important information for the evaluation of a start-up unfortunately fell victim to the cut, but Papydo seemed to have convinced here too, because the often particularly number-critical lion Carsten Maschmeyer jumps up enthusiastically very early on and hands the two a check for the desired investment sum of 100,000 €. He offers them the money for the 12.5% on offer, doesn’t want to negotiate at all, he’s that excited.

And while a few more questions are asked, for example about the competition, one already senses that it will not stop there. Carsten Maschmeyer asks Judith Williams if she wants to take part, who soon says yes. Nils Glagau and Ralf Dümmel also have their first exchanges of words.

But anyone who would have thought that a combined offer would lower the valuation – as is often the case in the cave – at least mathematically, is in for a surprise: even in a double pack, the finance lion and the beauty entrepreneur do not renegotiate, Carsten Maschmeyer and Judith Williams also offer the desired 100,000 euros for 12.5% as a pair.

The founders accept the offer beaming and grateful, but remain steadfast even when asked, because they want to listen to all the lions before they make a commitment.
You can really learn something from the way they conduct the negotiation here, without letting any kind of negative mood arise. The lions are aware of the competitive situation, and the fact that Nils Glagau and Ralf Dümmel are still hesitating with their offer could put the founders under some kind of pressure to react, despite their good starting position.

But they don’t let that happen, even when Judith Williams pushes a little towards the decision because of the hesitation of the male duo, they don’t change their attitude a bit. But this is neither stubborn nor tactical: friendly, extremely positive and with an emphasis on gratitude for the existing offer, they say they definitely want to be polite enough to listen to everyone, and then actively ask the other lions what they have in mind.

A way of passing the ball that is as clever as it is beautiful. Some may now think that they could have emphasised their good negotiating positions here in order to get better counteroffers. But what for, all participants have understood that there is a great investment opportunity here. Artificially creating a gap that emphasises this circumstance would lead nowhere, except to jeopardise the good mood. This could even provoke the other side to start tactics and to go deeper into the negotiations, because it must assume that this is what it is all about. Why else emphasise your good position when it has not only already become clear, but you have also been praised throughout for your great start-up?

But the founders keep the mood up, not obsessively, but with positive energy throughout. So, then Dagmar Wöhrl offers exactly the deal they want, while Ralf Dümmel and Nils Glagau want 20%. In fact, you can hear a little that the former is worried about not getting the deal because of the mathematically worse offer, but both agree that they cannot work with lower percentages. So, haggling over percentages seems quite futile here anyway.

In the end, the two founders decide in favour of the Maschmeyer/Williams duo, and the percentages don’t seem to have been the deciding factor. Besides the added value of the two lions, it was probably above all Carsten Maschmeyer’s enthusiasm for the topic and the founders that he showed right from the start. Also, something that goes against every traditional rule of negotiation. And that was a good thing.

Because what many fans of patriarchal negotiation methods often overlook: When it comes to valuing a start-up, two parties are negotiating here who normally want and need to work with each other for a long time to come. Elbows in the negotiation can therefore cause lasting damage to the still fresh relationship of trust, and thus put long-term success at risk before they have even really started to work together. Artificially creating a gap and haggling over the last few percentage points should therefore be carefully considered. Or better yet, leave it alone.