You can make many mistakes when pitching and talking to investors. But some are made much more often than others. In the final episode of the 12th season of "Die Höhle der Löwen", one of the most common could be observed. 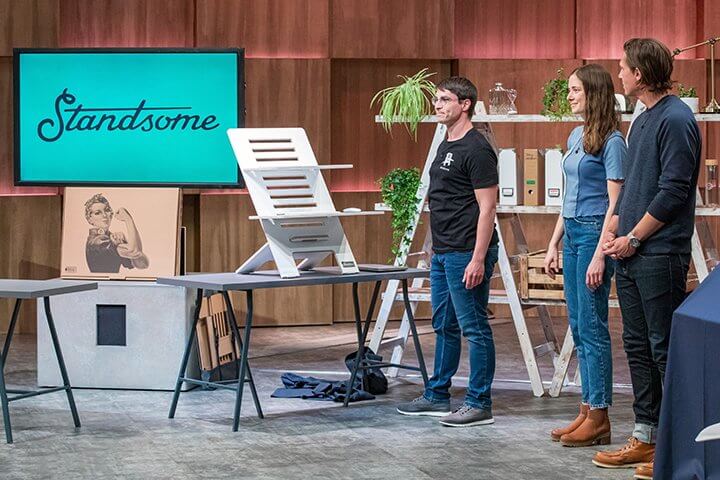 The founding team of Standsome did something that has rarely been seen in the start-up show. Where normally only the problem and solution are presented by the start-ups in the pitch itself, the team of three directly mentioned an important key figure. Most candidates leave this for the question-and-answer part after the pitch, many probably because their previous figures are often not so insanely high.

In the case of Standsome, however, 1.5 million euros in turnover is mentioned, a handsome sum for a company that is still quite young. Contrary to the rule, however, the lions immediately ask about it, because of course they want to make a note of it.

Carsten Maschmeyer, in particular, wants to know exactly, so the viewers learn the total number of customers and that the turnover of the previous year was 900,000 euros, but that the profit in this first year of 120,000 euros was considerably higher than the 10,000 euros in the last business year. Logically, this raises further questions, which the founders answer by saying that they had probably invested in staff and were planning not to increase turnover so much this year, but to become more profitable.

There are two mistakes here that one should not allow oneself to make in an investor pitch: Firstly, the justification is a bit thin. Because investing in staff in order to be more profitable afterwards, even though you don’t plan for much more turnover, doesn’t sound very convincing at first. After all, personnel costs due to new hires are monthly costs that recur over and over again. If the number of employees in the company grows with little growth in turnover, it will probably become less rather than more profitable at first. So you should be a bit more specific here and perhaps name the areas or even specific jobs that you have created and how they then contribute more to profitability than they cost.

On the other hand, it is really not a good idea to say so clearly that you are not really working on increasing turnover. The argument that one has invested in one’s own structures in order to become more profitable can make sense, but as a rule the really clear effects of successful scaling only become apparent after further strong growth. Without further explanations, the founder’s explanations initially seem more like excuses, which is a pity in view of the actually great financial success.

But the team is far from off the hook: after Nico Rosberg has tried out their product, a kind of mini piece of furniture for working comfortably while standing up, Carsten Maschmeyer again puts his finger in the numbers’ wound: he goes into the valuation and calculates the multiple on the profit. In fact, the founders suddenly don’t look so good: Their proposed deal of 400,000 euros for 15% results in a company valuation of just over 2.6 million euros. That is something like 1.7 times the turnover of 1.5 million euros. In fact, this is not a particularly high figure, but the lion does not calculate this, but the profit multiple. With the last profit of 10,000 euros, this is a whopping factor of 260. Shortly after that, he gets out.

Now, of course, one can say that very few start-ups make any profit at all in the early stages, and that it is therefore unfair to even include this in the calculations to this extent. In principle, this is also the case, but the team may have fallen back on the previous argument of only marginally planned growth: After all, if you want to achieve profit instead of revenue growth, it may well be that investors quickly measure you against that. In such situations, start-ups should be so sure of their figures that they contradict them here or at least explain in more detail how their valuation is arrived at and why they consider this method or method of calculation to be more appropriate.

However, the founders’ answer apparently fell victim to editing, in case this topic was explored in more depth. But Ralf Dümmel touched on another topic of figures, after all, sales and production prices had not yet been discussed. It then comes out that the wood used to make the furniture comes from Russia, but that a new supplier has already been found in Finland. This generally causes concern, because the lions fear serious supply problems for wood. Unfortunately, the Standsome team only agrees here – if there were any further explanations, the viewers don’t find them out either. At this point, for example, there would still have been a chance if they could have mentioned assured quantities of wood or already contractually agreed deliveries in order to alleviate the fears somewhat.

Instead, it seems as if one is now coming back to the product, because the advantages of folding and later also a follow-up product are presented. What in this case is probably due to editing, unfortunately happens far too often in reality: Founders go on and on about their product and how great it is, instead of addressing the investors’ criticisms, which focus on business model and numbers.

Because even if many don’t want to admit it: even the most convincing, beautiful and best product can’t make up for it if you can’t argue your numbers conclusively. Not even if you can name a really good key figure in addition.