Nippli: Customer problems don’t have to be politically correct #DHDL

No sooner was the participation of the founder of Nippli in "Die Höhle der Löwen" announced and her product idea made public than there was the first gloating and the first small uproar on the net. Why should women necessarily make their nipples invisible? But she doesn't say that at all, has not only women as her target group anyway and her sales figures clearly speak the language of market acceptance. A plea for less idea-focusedness. 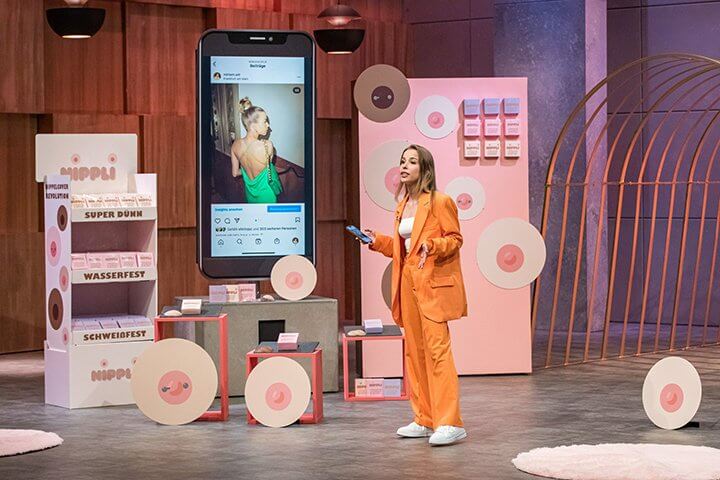 Miriam put on a hell of a performance. All five lions present were blown away by the then 22-year-old, they all made her an offer, they didn’t even want to fight, she was supposed to decide freely who she would give the 20% of her company shares in Nippli to for 90,000 euros.

Hardly anyone would have thought that the day before who had read the pre-broadcast articles and especially the accompanying comments on the net. As is so often the case, the focus here was on the product, but many readers seemed not to have read beyond the mere description of the functionality – or this information was missing. After all, a founder who is already opening her third business at the age of 22 should already be impressive per se.

Somehow she seems to be able to do something that many other people actually wish they could do: understand how to solve customers‘ problems and also market corresponding problem solvers.

Now she had discovered a new problem: emerging nipples under thin fabric. And already the net community cried out a little. What’s so bad about that, why do you have to cover the nipples? You don’t have to, and the founder never said you did. She seemed to have already reckoned with the reservations, because she even included a clear statement in her pitch to the lions that nipples are something completely natural and that she would by no means be of the opinion that women in particular should cover them – but that some women would like to because they feel more comfortable with them. It’s actually sad that founders in Germany have to anticipate what problems someone might have with their product and perhaps even feel compelled to take the wind out of the sails of these reservations as a preventive measure.

And somehow even defend their customers as to why they use this product. One has to wonder if we really live in such an obdurate society that simply doesn’t want to understand that problems are subjective and not always politically correct. Or whether nipples are really still a topic that makes too many people gasp because it’s so wicked. Neither is worthy of 2022.

If women don’t want to wear a bra, but also don’t want their nipples to show through their clothes, it is something natural and sensible in a market economy that a solution is offered for this. If you don’t have this problem, you don’t have to buy this product.

It was also significant when Carsten Maschmeyer asked practically directly whether it was also suitable for men, especially athletes, because he still remembered bloody, chafed nipples as a runner. By now at the latest, it should have become clear to everyone who had not understood the problem at all at the beginning that it is too short-sighted to evaluate only the very first impression. And to get stuck on what one thinks a product is.

This case also shows a strong connection to one of the fundamental problems in the German start-up landscape: People like to evaluate ideas too much. And then far too early. Many self-proclaimed experts and start-up coaches are also only too happy to tell early start-up teams what they think of an idea.

As you can see from the Nippli case, this is total nonsense. It’s all too easy not to understand a product properly or to forget an important aspect. Or you don’t belong to the target group and can’t judge at all whether a problem is solved and whether there is a willingness to pay.

The young founder provides impressive evidence for the latter: more than 26,000 euros in sales in only 1.5 months, without a marketing budget, clearly show that yes, people feel that emerging nipples are a problem and want to cover them. Regardless of whether others think it’s good or not. In fact, Nippli would have sold even more if they hadn’t run out of stock several times.

Dagmar Wöhrl then wants to know exactly who helped her not only to develop a product that stands out on the market, but also to set up such successful marketing. The answer is always the same: Miriam worked it all out herself.

Because that is precisely the decisive factor: it is not the idea that matters, but how founders implement it. Investors also like to say: „It’s all about execution.“ Only the implementation is decisive, the idea alone is worth nothing. But somehow no one seems to like to hear that.

However, anyone who has been in the start-up world for a while will have experienced some supposedly great ideas that didn’t make it. Or rather strange ideas that went through the roof. Just remember Airbnb with its initial air mattresses and today’s „worst idea that ever worked“.
That Miriam didn’t have a bad idea has already been confirmed by her customers. That she is a great founder who has the „execution“ fully under control was confirmed to her effusively by the lions this week.

That the pre-judgementalists will learn from this impressive demonstration of what can really be behind a supposedly nonsensical or even undesirable product is probably more of a hope that will remain unfulfilled. Nippli’s new investor Carsten Maschmeyer – as well as the other lions – are perhaps also so successful because they do not belong to those very people.

Instead, they try to get a complete picture before they judge, and generally focus on the founders – not on the raw idea.