The founders of the payment ring start-up Pagopace experienced a real rollercoaster ride in "Die Höhle der Löwen". From total enthusiasm to great scepticism to tough negotiation. But in the end they succeeded, at least some of the investors' euphoria lasted until the end. How do you do it? 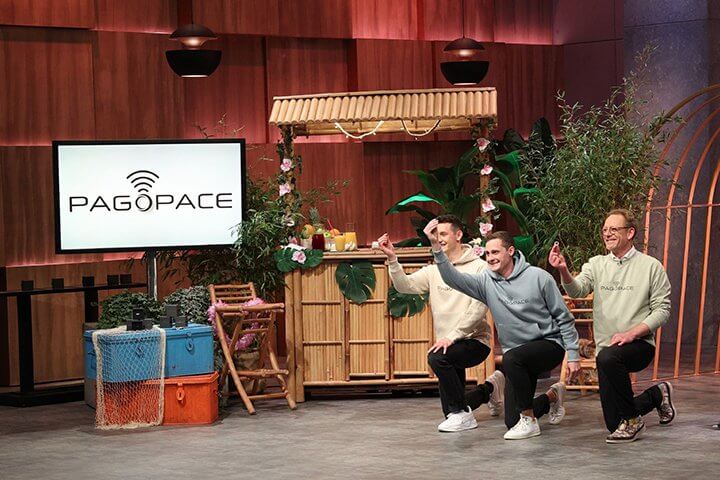 The first pitch of the twelfth season of „Die Höhle der Löwen“ already had a lot to offer: a technical product, an ambiguous market situation, a lot of enthusiasm, a lot of scepticism, and lions who couldn’t make up their minds.

But from the beginning: Steffen, Lukas and Bernhard presented a ring that makes simple, contactless payment possible, similar to a mobile phone or credit card. But if you describe it so matter-of-factly, it sounds a bit like holding a ring to the card reader instead of a card, smart phone or watch. A bit boring.

But the three founders were smarter and introduced their pitch via a use case that clearly highlights the advantages. The beach bar and the logo with the WiFi-related symbol somehow didn’t seem to fit together and had already confused the lions a little beforehand. But the advantage of paying at the beach bar was quickly and easily explained: the Pagopace ring is robust and waterproof, so it can be worn while swimming in the sea, so there is no need to take your wallet and smart phone with you and hide them on the beach.

The lions were immediately enthusiastic, and Carsten Maschmeyer himself added a second use case: skiing. Because as a winter sportsman, you often have to rummage around in the many pockets of your sportswear until you find your well-stowed wallet – after all, you don’t want it to fall out on stormy descents. The founders quickly switched gears and made this use case even more exciting: they mentioned that their ring would even work under the glove. So skiers and snowboarders will have had the image right in front of them of simply holding their hand up to a payment device and not even having to take off a glove in what might be quite a cold environment to pay for a drink or snack between two runs, for example.

And that is exactly the power of use cases: well told and presented, they create images in the minds of the audience, lead them into the situation themselves and let them play it out in their minds. In this way, they really feel the benefits first-hand, and often they notice other advantages of the product or other situations in which it would be even more useful. Just like Carsten Maschmeyer in the example above.

However, living use cases have another advantage than simply illustrating the application. When things go as well as they did for the founders of Pagopace, the audience – and thus mostly the potential investors – become the start-up’s allies, because they themselves suddenly find new arguments and possibilities for using the product. This can shrink the psychological distance between the two, you feel more connected, you have something in common somewhere. This can be a very valuable step in preparing the way for an investment, because if you feel connected to someone, you are naturally reluctant to turn them down.

Of course, this is all a bit exaggerated for the sake of clarity, but these effects should not be underestimated. One or two well-developed use cases, well presented in a pitch, can definitely trigger enthusiasm that helps you along. However, it’s a fine line, because you have to find the perfect balance between an easily imaginable description and openness to the audience’s ideas at the same time. If you describe your use case too well, there is nothing left for the audience’s imagination to do; if you describe it too little, they may not even put themselves in the situation. Just as much, then, should be to get the other person’s „head cinema“ going – and then embellish things further yourself.

So Pagopace had managed that with the lions, and their first sales figures – around 3000 units and 250,000 euros turnover in the first 4 months – were quite impressive. But then came the question about the competition, and somehow it seemed as if things were going to get bumpy after all. The founders had to admit that there were already similar products from other countries, but apparently no one had been able to sell large numbers of them.

This made the lions a little doubtful as to whether things could really be different in this case, and soon Nils Glagau and – present today as a duo on a double chair – Dr. Georg Kofler and Ralf Dümmel dropped out.

But Carsten Maschmeyer was still interested and entered the negotiation, which particularly excited the founders. After a bit of back-and-forth, they finally agreed on 200,000 euros for 15 % instead of the 10 % offered – though the lion is supposed to get another 5 % if he helps meet certain milestones for internationalisation.

Whether it was actually the enthusiasm from the use cases mentioned at the beginning that lasted so long, or whether the financial expert, for example, saw other possibilities in the Cologne team’s business model besides just selling the rings, is of course hard to say.

However, Pagopace and his new lion partner will soon want to address many more people than just water and winter sports enthusiasts, we can be curious!